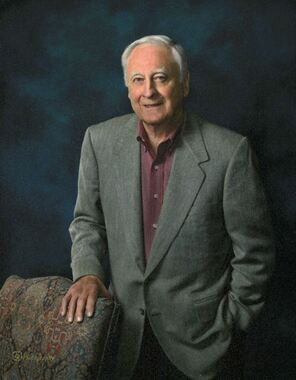 Verlan Wayne Harrell, 85, of Norman, Oklahoma passed away on January 21, 2020. He was born April 26, 1934 the first of four children to the late Burnell and Irene (Sill) Harrell. Verlan was raised in Gage, OK, where he graduated from high school and went on to achieve his BS of Geology from The University of Oklahoma in 1959. He was a major champion for OU operating as a University of Oklahoma Foundation Trustee for 31 years and continuing as a Trustee Emeritus. He was an Energy Center Founder as well as a member of the Quarter Century Club with over 3 decades of giving. Verlan operated as President of the Sarkeys Foundation, which donated the Sarkeys Fitness Center and contributed to OU College of Law. His passion for flying began at 15 when he received his pilot's license prior to his driver's license and ultimately lead him to join the ROTC Air Force at OU. Throughout his lifetime, Verlan devoted his life to the operation of many oil and gas companies working up until his final days. He was preceded in death by his beloved wife of 63 years, Kay (Knowles) Harrell. He is survived by his two daughters Sherry Sherrow, and husband Dave, of Raleigh, NC and Angela Josephs of Dallas, TX; and 5 adoring granddaughters, Hayden (Sherrow) Sullivan, and husband Sean, Lynley Sherrow, Lauryn Josephs, Kristin Josephs, and Meagan Josephs. Verlan is preceded in death by his brother Elvin Dale Harrell; and is survived by his sister, Carol Beasley, and late husband Max Hartwell Beasley, Jr. and brother, Terry Harrell, and wife Anetta. His loss will be felt by not only his family and friends, but all those whose lives he touched through his charitable contributions.

In lieu of flowers, charitable donations can be made to The Verlan Harrell Endowment Fund, C/O OU Foundation: PO BOX 258856 Oklahoma City, OK 73125-8856.
Published on January 23, 2020
To plant a tree in memory of Verlan Wayne Harrell, please visit Tribute Store.

Plant a tree in memory
of Verlan

A place to share condolences and memories.
The guestbook expires on April 22, 2020.

Larry Henderson Family
So sorry for your loss and Verlan was a very special man! We will be praying for God to comfort you with his peace and wonderful memories of his life!

A New Sunrise Spray was purchased for the family of Verlan Wayne Harrell.  Send flowers

Heavenly and Harmony was purchased for the family of Verlan Wayne Harrell by The Le Norman Family.  Send flowers

Ray Boisvert
I am deeply saddened by Verlan’s passing. He was a good friend and a top notch Oilman.
Sharon McGee Constantin
My sincere condolences to Verlan’s loved ones. My families knew Verlan well. He will leave a space in our hearts. Rest peacefully.
Ralph Sallusti
Deepest sympathy to all Verlan's family. He was a kind and gentle soul.
Rest in peace.
Camille Armor Dowers
This is to Sherry and her family...my deepest sympathy. I never realized your father was from Gage! I'll be thinking of you in prayer during this time.