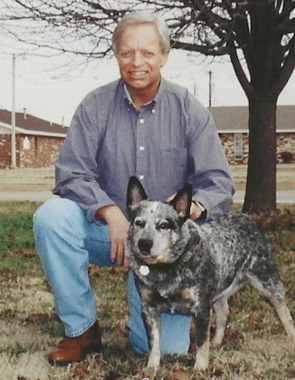 Back to Tommy's story

Tommy Gene "Tom" Morgan, of Noble, Oklahoma, passed away January 2, 2020 at the age of 65. He was born September 26, 1954 in Norman, Oklahoma to Gene Byron & Betty Alene (Woodrow) Morgan.
Tom grew up in Norman and attended Norman High School, graduating in the class of 1972. He went on to attend the University of Oklahoma and graduated with a Bachelor's Degree in Law Enforcement Administration. For most of his working career, Tom was respected as a self-employed Petroleum Landman
Tom enjoyed OU football, farming, hunting and fishing. Tom was an avid hunter the majority of his life, but in the last several years he preferred to enjoy the outdoors by watching and photographing wildlife. Scott and Carol Bauman filled his heart by allowing him to tend to their farm and work with their land and animals. He had an eclectic taste in music from Taylor Swift, the Beach Boys, and Shania Twain to Elton John, as long as it was LOUD. Tom also had a passion for weather and his favorite pastime was to watch the storms come in. His family always counted on him to send out severe weather alerts.
Tom's grandparents, Mary and Tommy Woodrow, blessed him with a plethora of cousins, aunts and uncles that fostered his great sense of humor. They often rode motorcycles or 4-wheelers together growing up and regarded him as the planner and researcher when a trip or get-together was planned. Tom is survived by his best friend and birddog Boomer, 1 son, Mack Morgan, of Norman; 1 daughter, Macey Stewart & husband, Travis, of Norman; 3 grandchildren, Jaden Chapel-Morgan, Tesa Stewart and Daniel Stewart; his mother, Betty Morgan, of Norman; 2 sisters, Mary Hawkins, of Noble, and Christine Sarff, of Norman. The family would like to thank his aunt and uncle Janie and Marc Murphy, nephew Billy Sarff, niece Jenny Shuman, cousins Chad Murphy and Rusty Grissom and a multitude of extended family that he cared for so deeply. He is preceded in death by his father, Lt. Col. Gene Morgan.
Published on January 8, 2020
To plant a tree in memory of Tommy Gene Morgan, please visit Tribute Store.

Plant a tree in memory
of Tommy

A place to share condolences and memories.
The guestbook expires on April 07, 2020.

Kathleen Horton-Simpson
Tom was a great guy. Always remember him in his camouflage heading out on some kinda hunting trip.
Randy warren
I'm sorry to hear about Tom's passing. I grew up with Mary and Christine and think of the family often, especially when I drive by their old home off Stubman.
View all