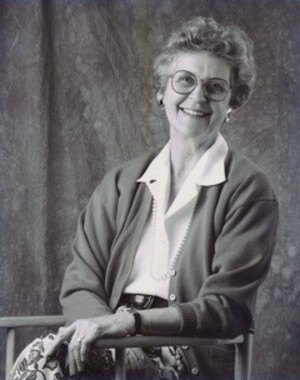 Mary Lee (Lyon) Foor passed away on Sunday, October 20, 2019. She was born June 4, 1921, in Geary, Oklahoma to Luther Elfred and Ruth Bessent Lyon.
She graduated from Geary High School in 1938 and attended college at the University of Oklahoma, graduating with a B. S. in Education in 1942. She was a member of Delta Gama sorority where she made many life-long friends. She was active in the Baptist Student Union and attended First Baptist Church, Norman where she met her future husband, Raymond Terrell "Terry" Foor. They married January 25, 1942 and celebrated their 75th wedding anniversary in 2017 before he passed away that September.
After graduation, while Terry was serving overseas in WWII, Mary Lee moved to Washington, DC to work at the U. S. Treasury Department from 1942-44 and the U. S. War Crimes Office from 1944-45 as a stenographer recording statements from POWs. She was preparing to serve at the Nuremberg trials in Germany when Terry returned from Europe. She recalled many fond memories of Washington, DC spent with her sister and brother-in-law and new friends she met from around the world.
Mary Lee and Terry returned to Norman in 1945 where she worked in the Chemical Engineering department at the University of Oklahoma while Terry worked on his master's degree. They then spent the next six years traveling around the Mid- and Southwest while Terry formed his engineering company eventually leading them to settle in Oklahoma City in 1951.
In 1954, they moved to Norman to raise their family where Mary Lee was active in the Delta Gamma Alumnae Club, PEO Chapter BP, Wednesday Book Club, Sewing Club, Holiday Club, Junior League of Norman and Assistance League of Norman, and volunteered at Norman Regional Hospital, Sam Noble Oklahoma Museum of Natural History and Fred Jones Jr. Memorial Museum of Art. In the mid-1970's, she discovered her love of painting and began a prolific career as an artist eventually becoming a founding member of Gallery III, a co-op of local artists. She painted well into her 90's and produced an annual Christmas card for family and friends.
She was an accomplished golfer and traveled to England and Scotland as well as across the U.S. to play courses with Terry and friends. She loved watching all sports, especially the OU Sooners, and she and Terry were founding members of the University of Oklahoma Associates. She was a member of First Baptist Church, Norman, where she served on many committees and co-chaired building efforts involving Hallock Hall and the sanctuary.
Mary Lee is survived by her children Diane Knapp, Cindy Foor and partner Kerry Mulholland, Ramey Foor and wife Laurie, Tracy Foor and wife Trish, and Ginger Murray; grandchildren Trey Wheeler and wife Lauren, Clark Wheeler and wife Carolyn, Grant Wheeler, Terry Foor, Kevin Foor, Jeremy Foor, Gordon Foor and wife Taylor, Patrick Murray and Katie Murray; four great-grandchildren Elaine, Cale, Lee and Alice Wheeler; nephews Mike Atha and wife Lois, Steve Atha and wife Sherry; and numerous cousins, nieces and nephews.
She is preceded in death by: her husband, Raymond Terrell "Terry" Foor; father, Luther Elfred Lyon; mother, Ruth Bessent Lyon; infant brother Emmett Lyon; sister, Thadeene "Jimmie" Matheson and husband Roy Matheson; sister and brother-in-law, Patricia Bernice and Lyndon Mannen; sister and brother-in-law, Virginia Sue and Dorman Kirkhuff; cousin Kathryn Martin and husband, Marshall; cousin Wade Lyon and wife, Shirley; cousins Paul and Neil Lyon; and son-in-law, David Knapp.
A memorial service will be held at 2:00 p.m. Friday, November 15, 2019 at First Baptist Church, 211 W. Comanche, Norman. In lieu of flowers, memorial donations can be made to the Norman Public School Foundation, 131 South Flood Avenue, Norman, OK 73069.
Online condolences may be shared at www.tribute.care
(405.292.4787).
Published on November 8, 2019
To plant a tree in memory of Mary Lee (Lyon) Foor, please visit Tribute Store.

A place to share condolences and memories.
The guestbook expires on February 06, 2020.