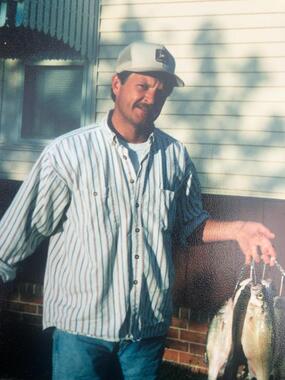 Back to Jerry's story

Jerry N. Wright Sr. was born to Buddy and Jeanine (Hopin) Wright on Lackland AFB, San Antonio, Texas December 12, 1957. He passed April 9, 2019 in Noble, Ok. He was preceded in death by his parents. Survived by his children; Son Jerry Wright II and wife Tara, Daughter Jaqueline "Nina" Wright, their Mother Janine Seals, grandchildren; Ryleigh, Taelyn and Parker, Brother David Wright, Sister Donna Wright Sheets, Nieces Jennifer, Jeanine, Danielle and Nephew James.
Jerry was proud to have achieved Eagle Scout and Order of the Arrow in the Boy Scouts. He attended Hirschi High in Wichita Falls, Tx. graduating in 1975. In support of his lifelong love of cars he attended Arizona Automotive Institute and spent most of his career in the automotive industry. He married in 1975 and had two children. They spent many years in New Braunfels, Tx. and moved to Noble in the late 90's so he could help care for his grandparents and maintain the family farm. He enjoyed fishing, hunting, boating, golfing and playing his guitars. He always had a beer in his hand and a joke to tell. His favorite quote was ' I swear Woodrow, Heaven is better than Montana. Shake a leg and get on up here.'
MEMORIAL SERVICE: 1:30pm Monday, April 15th, McMahans Funeral Chapel
Directed By McMahans Funeral Home
Published on April 13, 2019
To plant a tree in memory of Jerry N. Wright Sr., please visit Tribute Store.

Plant a tree in memory
of Jerry

A place to share condolences and memories.
The guestbook expires on July 12, 2019.

Restore the guestbook to view the 6 more posts by family and friends, and share a memory or message of condolence of your own.