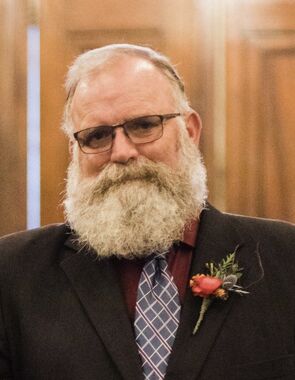 Back to Glenn's story

Edmond Glenn Dobry of Norman, Oklahoma was born November 12, 1954 to Edmond Aloysius and Dorothy Mae (Jordan) Dobry in Chickasha, Oklahoma. He passed on November 14, 2019, two days after his 65th birthday. On October 30, 2004 Glenn married the love of his life, Susan Roberta (Blachly) Dobry, with whom he shared 15 wonderful years before his untimely death. Glenn always made time for his family; he absolutely adored his eight grandchildren and took every opportunity to spend time with them.
Glenn lived a life of service, both to his community and to his Church. He began his career with the University of Oklahoma Police Department before taking paramedic training and moving into EMS, where he stayed for 17 years and was promoted to the rank of Sergeant. In 1995 he transitioned from EMS to the Norman Police Department where he remained until his retirement as a Captain in 2016 after a total of almost 38 years of service to his community. During his service with the City of Norman Captain Dobry earned more than 100 letters of appreciation and commendation.
Glenn was a devout Catholic and after retirement he was able to focus more on serving his Church, St. Thomas More University Parish. He was a devoted member of the Knights of Columbus, a Eucharistic Minister, and the Church's Easter Bunny, handing out finger rosaries and Hershey's kisses to the children every year after the Church egg hunt. Glenn was instrumental in organizing the annual St. Thomas More Golf Tournament, and as an avid golfer he always entered a team into the tournament.
Glenn held a variety of interests in addition to golf: puzzles, Jeopardy, both men's and women's OU athletics, tropical fish, sports in general, and volunteering. Glenn gave countless volunteer hours through his work with the Knights of Columbus and the Norman Christmas Parade as well as his positions on the boards of the Women's Resource Center and Parents Helping Parents.
Glenn was preceded in death by: parent Edmond and Dorothy Dobry; sisters Eva Ann Dobry and Evelyn Dobry; and brother-in-law George Hoebing. Left to cherish his memory are: wife Susan Dobry of the home; daughter Jennifer Fowler and husband Adam of Henderson, Nevada; son Benjamin Stapp and wife Anny of Norman; daughter Heather Fischer and husband Joe of Norman; daughter Rebecca Dobry of Houston, Texas; and their mother Alicia Martin; stepson Joe Cotrone and wife Charvee of Oklahoma City, Oklahoma; stepson Kevin Cotrone and girlfriend Rhea Kickham of Redmond, Washington; sister Carol Hoebing of Yukon, Oklahoma; brother Allen Dobry and wife Orlenna of Bothell, Washington; brother John Dobry and wife Pat of Norman; sister Jeannie Simon and husband Jay of Edmond, Oklahoma; grandchildren Robert, Sloane, Ian, Philip, Nathaniel, Michael, Simon, and Jude; numerous cousins, nieces, and nephews; and a host of friends.
Memorial contributions in Glenn's name may be made to the St. Thomas More Organ Fund (contact Nolan Reilly at 405.321.0990 or music@stm-ou.org) and Willow Pregnancy Support of Norman (willowpregnancy.org/donate).
Glenn's family has entrusted his care to Tribute Memorial Care in Norman (405.292.4787). A Rosary will be held at St. Thomas More University Parish (100 Stinson St., Norman) on Wednesday, November 20th at 6:00pm. A Memorial Mass of Christian Burial will be held at St. Thomas More on Thursday, November 21st at 10:00am. He will be inurned at Evergreen Cemetery in Minco, Oklahoma.
Condolences and memories of Glenn may be shared at www.tribute.care.
Published on November 19, 2019
To plant a tree in memory of Glenn Dobry, please visit Tribute Store.

Plant a tree in memory
of Glenn

A place to share condolences and memories.
The guestbook expires on February 17, 2020.

Andrea Ratkovic
Glenn was always such a warm and funny and nonjudgmental guy and a fantastic police officer.
Judith Black
Susan, Merle & I send our love and prayers to you at this most
difficult time. I wish we could
be there with you & the family. Judyb
Steve Riddle
What a kind man. I first met Glen in 2018 at Westwood Golf course and he exemplified kindness, gentleness & humor. As a Christian I new that I had found a friend and now I know that I will see him again.
Patricia Napolitano
Glenn was always the one who reached out to his more distant relatives. He like to keep the family in touch. He will be missed. Rest in peace.
Lydia C Bugner
Glenn was a good man and touched many lives in the Norman community in a positive way. The world will be an emptier place without him. I was proud to be his friend. We will all miss him but he will be watching over his family as their guardian angel now.
Chelsea Love

Serene Retreat was purchased for the family of Glenn Dobry by Chelsea Love.  Send flowers

Vaidy Rao
I lost a great friend He was like a brother to me We had coffee every week at Jimmies, they will miss Glen too We was a great humanitarian I pray to God to give Susan the courage to bear this personal loss .
Michael palermo
I saw Glenn as a gentle but firm soul. I, along with many others have a great respect for Glenn. Peace of JESUS BE WITH YOU GELNN AND YOUR ENTIRE FAMILY.

Sweetest Sunrise Bouquet was purchased for the family of Glenn Dobry.  Send flowers

Kermit and Sandy Denton
Glen was one of my hero’s. Always appreciated all he did for our church. I am very sorry we never got his Hudson running I know he would have enjoyed driving it. On his Spirit Journey. God Speed.
Chelsea Love
Susan, there are no words for this. I’ll never forget Glenn and his humor and his servant’s heart- like how I could count on him in a moments notice to be my Santa in our Christmas programs at Lakeview. For a young teacher in a new school and new community, you and Glenn made us feel like family and I will always be so grateful God put you both in my life during that time. Love you friend- praying for you each day.
View all