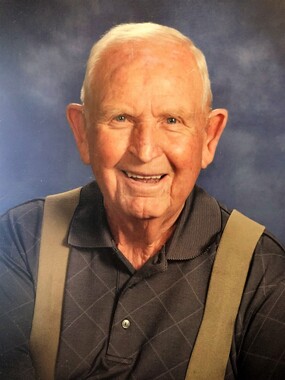 Back to Ernest's story

Ernest "Red" Webb, 89, of Noble, OK peacefully departed this earth on Tuesday evening, February 12, 2019.
Ernest was born to Edward Bert and Edna Blanche Webb on May 20, 1929 in Elk City, OK. It was there he met Loene, his wife of almost 65 years, while making deliveries to the restaurant where she worked. They were married shortly after in Wheeler, Texas on April 23, 1949. They lived in Elk City and after serving our country in the Army during the Korean War, they later moved to Norman, OK. In 1975, they moved their home to their acreage on Morningside Drive in Noble. It was there they built a happy life together based on their strong faith and devotion to each other.
Red always worked in route sales delivering milk, bread, and cookies in Western and Central Oklahoma until he retired first from Rainbo Baking Company and then retiring again from their Pepperidge Farms cookie franchise. Even after retiring, he continued to work driving handicap vans for CART and the Postal Training Center for many years.
Pop loved his church family at First Baptist and was on various committees throughout the years, but the Food Closet was a ministry near and dear to his heart. He loved the fellowship and outreach and the impact it had directly on families in need.
No matter where he was, or what he was doing, his goal was always to make whoever he was talking to smile, and he did that up until the very last moment of his life. He was a true friend to so many. His legacy will continue on through the five generations of his family, and through countless friends, neighbors and acquaintances he had such great impact and influence over. Ernest is survived by his son Ed Webb (Michelle), daughter Sue Warnke (Jim), daughter Jeannie (Gary)Humphrey, daughter in law Jeanne Webb, loving friend Mary Ritchie and many grandchildren, great-grandchildren and great-great-grandchildren. He was preceded in death by his wife Loene, his son David, his parents, brothers and sisters.
VISITATION HOURS: 2:00pm-5:00pm Sunday, February 17th, McMahans Funeral Home
FUNERAL SERVICE: 11:00am Monday, February 18th, Noble First Baptist Church
Arranged and Directed By McMahans Funeral Home
Published on February 16, 2019
To plant a tree in memory of Ernest Edward Webb, please visit Tribute Store.

Plant a tree in memory
of Ernest

A place to share condolences and memories.
The guestbook expires on May 17, 2019.

Restore the guestbook to view the 3 more posts by family and friends, and share a memory or message of condolence of your own.