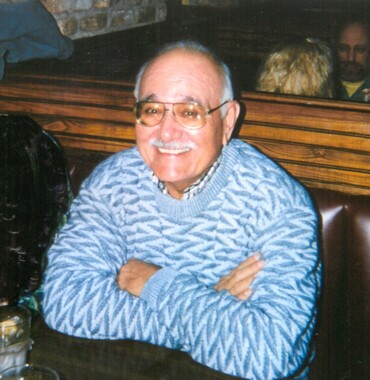 Demetrio O. Pacheco was born to Frank S. and Fulgencia E. Pacheco in Tucson, AZ. He died at the Norman Veterans Center. He fought a long hard fight against Alzheimers that robbed him of his beautiful mind.
He was the 4th oldest of 9 children. He attended school in Tucson, was an accomplished athlete and won many awards in track and was also played tennis. He joined the Air Force and was in Korea and worked as an aircraft mechanic during 1951-1953. He married Betty Gomez in Tucson, and had 3 children: Christina, Albert and Edward. During this time, he was an aircraft mechanic. He graduated from the University of Arizona. He was a computer programmer for 30 years. He had his own business for 10 of those years. After his divorce and closing his business, he was a consultant for IBM. In 1994, he was working in Kansas City, MO where he met Janalee Snyder. After a few years of mainly long-distance relationship, they were married in Norman, OK, as Janalee was transferred there to finish out her career with the Federal Government. Many happy years were spent in traveling to different states and even trips to Spain and Portugal. Demetrio enjoyed teaching English to Spanish speaking people at St. Joseph's Catholic Church, and many friendships were born as a result of his labors. He also thoroughly enjoyed playing golf with his golfing buddy, Dale Campbell. Dale came to the Veterans Center for many months to visit him, until the time came when he slipped from Demetrio's memory. Demetrio was preceeded in death by his father and mother, sister Carman, brothers Ralph, Ramone, Frank and Albert. He is survived by his wife, Janalee, of the home, children Christina, Albert and wife Susan, and Edward, grandsons Allen & David, sisters, Consaulo Pacheco, Mary Ann Pacheco, and Mary Louise Vincello, stepchildren Sandra Snyder, Craig Snyder and Valerie Holman, and step-granddaughter Aubrey Snyder.
Sincere thanks is extended to the wonderful staff on the E-1 Unit at the Norman Veterans Center who took such wonderful care of him for 3 ½ years. Donations in his honor may be made to Trinity Lutheran Church, 603 Classen Boulevard, Norman, OK 73071, or to the Alzheimers Association.
Published on February 7, 2020
To send flowers to the family of Demetrio O. Pacheco, please visit Tribute Store.

Send flowers
in memory of Demetrio

A place to share condolences and memories.
The guestbook expires on May 07, 2020.

Luis Gonzales
I met Demetrio in the late 70’s he had the mind of a genius. I was running for the State Senate in Arizona and he offered to do computer work for my campaign. He did s great job with numbers data to the point that his voter turnout predictions were very accurate. We won that Senate race by 128 votes! We stayed friends for years until he left Tucson and we lost touch. He was a very intelligent and caring person. I want to offer my condolences to all his family especially his children. May the Creator guide his journey with his Devine light to the world of the flowers. AMEN
Duane Brosowske
Demetrio, I only had a short time to get to know you. We would share thoughts about God's word at our evening bible study at Trinity and I enjoyed your insights. You had so many interesting life experiences to tell about. Thank you for your service to our country. Now you've gone on ahead to your heavenly home, we will meet again.
Sandra Snyder
Demetrio was my step father and 1 of the most intelligent,well educated men I'd ever met! He had a beautiful mind and akin to a Venus fly trap as he never seemed to forget anything once it entered his computer of a mind.We had very complex conversations that thrilled us both and such a joy to talk to.I admired him greatly and am thankful he n Mother were married and so close.For many years they gave me motivation that love could come to those of us"over the hill" but alas after years of illness and being bedridden I no longer see that for myself.I regret our illnesses and distance kept us from getting to know one another better but am thankful he and Mother had so many good years loving and... sharing life together and having my daughter,Aubalee to visit so much.He was a class act and 1 to be remembered always.God bless you"D" and may you rest in peace and be free as a bird to fly the friendly skies of heaven forever and ever iCJna I love you and have missed you for years now.Thank you for loving my Mother and taking such good care of her.You will be missed by MANY!!!Read more
Janet Terrones
Mr. Pacheco and I shared the joy of teaching students English at St. Joseph’s. I remember his focus was on correct grammar and mine practice of conversing. The blessing of seeing students flourish and their children grow and develop was such a significant reward. May he Rest In Peace and be rewarded for his generosity in teaching.
View all