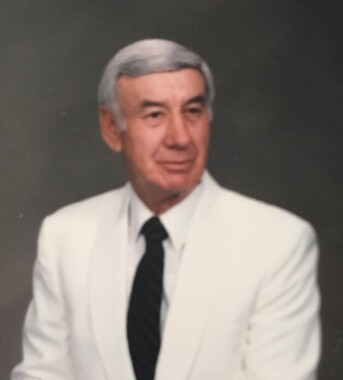 Billy Pyeatte "B.P." Adkins, age 94, of Goldsby, OK passed away June 28, 2018, at his home. He was born on December 12, 1923, in Goldsby on the family farm. He was 3rd of five children born to Lewis Floyd Adkins and Norabelle (Pyeatte) Adkins. Billy grew up a farm boy and attended Washington schools graduating in 1942. After high school, Billy joined the United States Navy, and proudly served his country from September 1, 1942 through March 8, 1946. He was a 2nd Class Petty Officer. Billy was on the USLW Grant DD649 Battleship Destroyer. Also on the Loading Floating Drydock of White Marsh from November 1945 to March 1946. He did two invasions of North and South Borneo, and while on that mission he sunk a Japanese Submarine between USA and Hawaii in 1945. While he was in Japan, his assignment was to blow up mines in the Harbor.
After being honorably discharged in 1946, he attended the University of Oklahoma for two years. While at OU he was a member of the Men's Glee Club and the Mixed Acapella Group.
Billy married the love of his life, Yvonne Phillips on August 6, 1949, and together they had two children, son, Scott and daughter, Marcia. Billy worked as a farmer and rancher all of his life and was very involved in the Goldsby community. He was on the first planning commission for the town of Goldsby and on the board of Adjustments for 20 years. He was on the Farmers Home Administration Committee for McClain County; on the ASCS committee for 20 years, measuring wheat and taking Agriculture Census. He was on the Equalization and Excise County board for 10 years and also on the 9th District Federal Land Bank Advisory Board of Wichita, Kansas for 18 years. He served on the Board of Directors and Federal Land Bank of Anadarko for 18 years, and on the Veterans Building Committee on Hwy 9 West. He also was a member of McFarlan United Methodist Church in Norman.
Billy's hobby was farming and watching his son and grandsons farm. He was proud of his family and his Choctaw Indian heritage. He will be remembered as a wonderful husband, and a loving father, grandfather and great grandfather. He was a special brother and uncle. He will be greatly missed by all who knew him!
He was preceded in death by: His parents, Norabelle and Lewis Adkins; Two brothers, Floyd and Charles; One sister, Betty Melton.
Billy is survived by: His loving wife, Yvonne of the home; Son, Scott Adkins and wife Libby of Goldsby; Daughter, Marcia LaMunyon and husband Larry of Goldsby; 5 grandchildren: Brandon Adkins of Goldsby, Brett Adkins and wife Tina of Goldsby, Phillip Adkins and wife Monica of Goldsby, Mitzi Moring and husband Barry of Newcastle, Ryan Hill and wife Megan of Goldsby; 13 great grandchildren, many nieces, nephews, cousins and a host of friends.
Funeral Service will be held at 2:00 P.M., Friday, June 29, 2018 at Wilson-Little Funeral Home Chapel in Purcell, OK. Burial will be at Washington Cemetery. In lieu of flowers, memorials may be made to the Goldsby Baptist Church. Send online condolences @wilsonlittle.com.
Published on June 29, 2018
To plant a tree in memory of Billy Pyeatte "B.P." Adkins, please visit Tribute Store.

Plant a tree in memory
of Billy Pyeatte "B.P."

A place to share condolences and memories.
The guestbook expires on September 27, 2018.