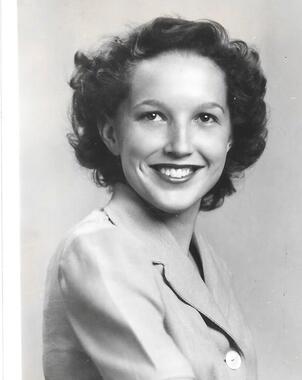 Back to Billy's story

Billy grew up in Lawton and was baptized at First Baptist Church at age 10. She was the Band Queen at Lawton High School, where she met Garold, her future husband. They married the day after she graduated because Garold was leaving for Europe to fight in World War II. While he was away, she received word from the Army that he was missing in action. Her sister, Coleen, said that she never gave up hope and that she continued writing letters to him every night for two months until they received word that he had been found safe.

After his return, they moved to Norman, Oklahoma where he attended the University of Oklahoma. Billy was an OU switchboard operator while Garold attended school. They had two children, Cindy and Bryan, who also grew up in Norman.

Billy and close friends played in several bridge groups for more than 50 years. She was also very skilled at knitting and needlework and people were proud to wear her sweaters. She was a pink lady at Norman Municipal Hospital for many years and a volunteer at the Cerebral Palsy Institute. She enjoyed hosting friends at home for OU football games and loved doting on her grandchildren.

The family will be forever grateful to her precious caregivers Lina Tang, Rona Ray, Vic Morales, Cindy Jackson, and Jackie San Juan and to all the sweet nurses and aides, and Chaplain Bill from Heartland Hospice; and her sweet neighbors Darlene and Bill Yousey.

A private memorial will be held at a later date.

Memorials may be made in memory of Billy Bowlby to St. Jude Children's Research Hospital, https://www.stjude.org/give/memorials-and-dedications.html.

Arrangements for Billy Bowlby and her family were placed in the care of Havenbrook Funeral Home of Norman. Online condolences may be shared at www.HavenbrookFuneralHome.com.
Published on December 13, 2019
To plant a tree in memory of Billy Ruth Bowlby, please visit Tribute Store.

Plant a tree in memory
of Billy

A place to share condolences and memories.
The guestbook expires on March 12, 2020.