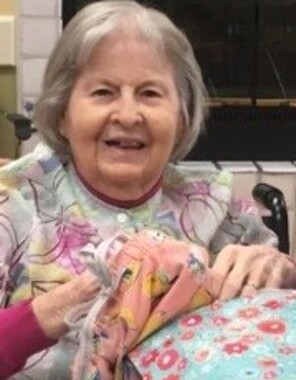 Back to Barbara's story

Barbara June (Bobbie) McMurray passed away Monday, October 28, 2019. She was born June 22, 1926, to Hazel Lillian and Ervin Ray Morgan. Barbara, know much of her life as Bobbie, enjoyed playing basketball and softball in her youth. She graduated from the University of Oklahoma in 1949 with a Bachelor of Business Administration degree. While attending OU she met Richard Dayton McMurray, who would become her husband of 54 years. She had two sons, Richard Morgan McMurray and Charles Eric McMurray, and was a strong (and vocal) supporter of her sons' athletic endeavors. She was the secretary at Cleveland Elementary School in Norman from 1970 to 1981. In her retirement she was the treasurer for a Cleveland County Fair home extension club. She was awarded blue ribbons at the Cleveland County Fair for her baking. She enjoyed tole painting, reading mysteries, traveling with her husband and family, and her four grandchildren. Bobbie was a loving wife, mother and grandmother who will be missed by many.
Bobbie was preceded in death by her twin sister, Betty Jane, who died at 3 months old; her parents, Hazel and Ray Morgan, her husband, Richard D. McMurray.
She is survived by her son Richard and daughter-in-law Janet, and her son Eric and daughter-in-law Anna. She is also survived by her four grandchildren, Ryan and wife Krissy McMurray, Kelsey McMurray, Corynn McMurray, and Maura McMurray, and two great grandchildren, Jocelyn and Bryson McMurray.
A graveside service for Bobbie will be held at Chapel Hill Memorial Gardens at 2:00 p.m. Friday, November 1, 2019. In lieu of flowers, donations can be made to the Alzheimer's Association of Oklahoma at www.alz.org/oklahoma.
Published on October 29, 2019
To plant a tree in memory of Barbara June McMurray, please visit Tribute Store.

Plant a tree in memory
of Barbara

A place to share condolences and memories.
The guestbook expires on January 27, 2020.

Debbie Nelson
I'm so sorry for your loss. Praying peace and comfort for all.
Krissy McMurray
Grandma Bobbie was such a wonderful and sweet soul. I have enjoyed hearing all of the stories from her children and grandchildren of Bobbie and their childhood with her. I remember one of the times that I first met her she asked if I was a graduate of OU. She really loved her Sooners. Bobbie was loved by all and will be greatly missed.
Jesse Coleman
Always loved your mom, Richard kinda?
View all